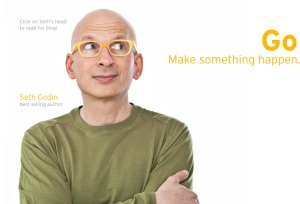 I’ve been reading a lot of Seth Godin lately.  He’s a great source to read when taking any type of risk on any type of venture.  Here’s a short youtube video that succinctly sums up his philosophy.

Essentially, his recipe is:

Yes, this advice is simple and banal, and it makes the cynic in all of us cringe. “Surely it’s more complicated than this,” we tell ourselves, “I don’t want to put all of my time and hard work into a venture just to have it fail.  Let’s look into it more before we rashly jump in.”  Until, before you know it, you’re 75 and you haven’t ‘jumped into’ anything because you’ve always managed to talk yourself out of it.  Ah, yes, we’re all familiar with that most insidious of human tendencies: rationalization.

I think the main reason most people quit either before or after Step 1 is that, for some reason, we have this bizarre expectation that we need to go straight from Step 1 to Step 7, skipping all of the hardship and toil in between.  We think that enough background research and initial preparation will enable us to lay out a perfectly straight path to success before we even start.  But as Seth Godin points out:

I don’t think the right question is, “is the path perfect?”

It’s probably, “Is this somewhere I’d like to go?”

If you always ask yourself the former question before you start a new venture, launch day will never come because any worthwhile venture involves unknowns. A perfect path does not exist for any venture worth doing.

In contrast, the latter question leaves the possibility of failure — or at least imperfection — wide open.  In a similar vein, Dan and Chip Heath, in their awesome book Switch, write that in order to prevent us from quitting when we encounter failure, we need to create “the expectation of failure.”  That is, before the launch of any tough and risky project, we must disabuse ourselves of the foolish notion that Step 7 directly follows Step 1, and instead we must realize that,

“[w]e will struggle, we will fail, we will be knocked down — but throughout, we’ll get better, and we’ll succeed in the end. …[P]eople will persevere only if they perceive falling down as learning rather than as failing.”

To slightly alter a phrase from Switch: “success isn’t an event; it’s a process.”  Now get started.  And expect to fail.  You’ll be surprised to find that it’s actually kind of liberating.